Serrano ham takes its name because of the way in which the animal is quartered which gets the name “V-cut” or “Serrano cut”.

Commonly the word “Serrano” is associated to hams proceeding from a “white pig”  (breeds as Duroc, Landrace or Large White…). However, this kind of V-cut or Serrano cut is not only used for quartering white pigs but also for Iberian pigs and Iberian hams.

Anyway, with the terminology Serrano ham or jamon Serrano, we make reference to ham coming from a white pig and not from an Iberian pig.

According to Spanish legislations there are 3 different kinds of Serrano ham depending on its quality. The three of them are listed below from the lowest to the highest quality:

As we said in our first post, iberian ham is also known with another names as pata negra or Jabugo ham. This is the reason for these names and its explanation:

Iberian ham is also known as “pata negra” because of the color of its hoofs. However, there are plenty of different pig breeds with black hoofs but not all of them are Iberian pigs. This is why factories and stockbreeders do not agree with the name “pata negra” and they always call it Iberian ham or jamon ibérico, in Spanish.

The Iberian name makes reference to one particular pig´s breed: the Iberian pig. Products produced from this animals get the “Iberian” surname.

Another name which is confusing is Jabugo ham. Jabugo is a city placed in the south of Spain that has a big tradition in producing Iberian hams. Some years ago it got a high development and the name “Jabugo ham” got famous as a common name for Iberian ham. Never the less, Jabugo is only one of the Iberian ham producer areas of Spain and even it was not the first one the get its D.O. which stands for “Denominación de Origen” (Denomination of Origin). The first one and pioneer to get this certificate of quality was the area of Guijuelo which got it in 1985.

To sum up, not all the black hoof hams are iberian hams and Guijuelo and Jabugo are just the name of spanish areas with D.O. in which iberian hams are produced not kinds of ham.

In the picture above you can see the black hoofs. 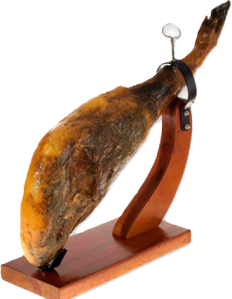 All of these are names make reference to one of the spanish most famous, tasty and delicious gourmet foods in the world.

In this blog, step by step, we will try to explain you everything about ham, the different kinds of hams, the name they get, how they are produced, how to distinguish them, how to prepare it and lots of different ways to eat and enjoy it.

We are sure you will enjoy this culinary treasure as much as we do.

Other Interesing links about ham